Bear and bees… together happily!

The Marsican brown bear (Ursus arctos marsicanus) is an endemic species among the most beautiful and fascinating of the Italian fauna whose small population is reduced to 50-60 individuals. It survives mainly in the most inaccessible areas of the Abruzzo Apennines.

In past centuries, the bear was also permanently present in the woods of the Rieti area where hunting and the thinning of the woods led to its progressive rarefaction, which culminated in the disappearance of the plantigrade at the beginning of the 19th century. Despite this, the Rieti mountains which preserve forest habitats of great ecological value, are still periodically visited by wandering bear specimens in search of food in poorly populated areas. 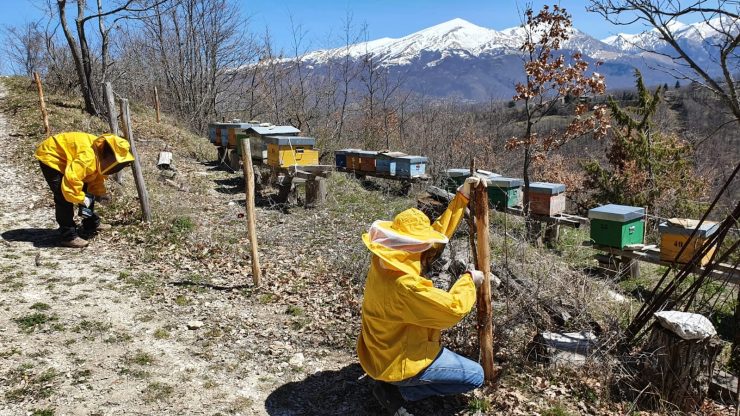 These occasional “visits” by the Bear, which bode well for a future stable presence of the most inaccessible areas of the territory, have caught some beekeepers unprepared as bears have undergone raids in their hives, plundered by the plantigrade of their gluttonous honeyed nectar. These incidents caused damage and triggered the justified protests of the beekeepers, who were not promptly recognized and reimbursed for the damage suffered by this particularly protected wildlife entity.

WWF Italy and Salviamo l’Orso have been committed for years to save the bear with initiatives aimed at reducing the causes of mortality of anthropogenic origin, favoring the increase of the small current population. They have been implementing measures to mitigate potential conflicts between the animals and human activities (animal husbandry and beekeeping) such as making electrified fences available to breeders and beekeepers as tools to deter bear intrusions.

In recent years, the bear population, for a long time on the verge of extinction, has recorded an encouraging resumption of the birth rate, so much so that there is hope for a territorial expansion of the species in some territories where it had long since disappeared. This has led the associations to extend their range of action also in the areas recently visited by some bears from Abruzzo with the aim of promoting a peaceful coexistence between the largest mammal of the Italian terrestrial fauna and human activities in nature. In this spirit, the associations have recently mobilized in favor of beekeepers who have suffered damage to hives, caused by at least one specimen of bear present between the upper Velino valley and the Monti della Laga.

One of the latest interventions carried out by the Salviamo l’Orso volunteers is the setting up of 3 electrified fences to protect apiaries in the territories of Amatrice and Accumoli, providing assistance and information on how to secure beekeeping activities and prevent attacks. In fact, the key to success is preventing damage rather than intervening after the damage has occurred. In the latter, the injured party must be reimbursed with good reason because the costs of guaranteeing the protection of protected species, bear in the first place, must be borne by the State and the Regions. These must not fall on those who share the territory with the bear (beekeepers, owners of small chicken coops for family use, breeders) or left on the shoulders of voluntary associations such as Salviamo l’Orso and WWF Italy.

The bear is a species in the Habitat Directive and protected by national and European standards. In addition, the Lazio Region has joined the Action Plan for the Protection of the Marsican Bear (PATOM), making commitments for its conservation. It is therefore desirable that the Lazio Region, in the same way as the Abruzzo Region, by following up on the commitments made, reimburse all the damages ascertained by bears that occur outside the protected areas. Furthermore, it is hoped that the Gran Sasso and Monti della Laga National Park, whose territory constitutes a critical area of ​​conservation of the bears, will also pay increasing attention and proactivity towards the management of the bear. Ways to do this are by starting the census of beekeeping activities, putting electrified fences are available and ensure rapid and priority reimbursement of damages.

WWF Italy and Salviamo l’Orso hope for the future return of the plantigrade to the Rieti area and are planning joint local initiatives to raise awareness, inform and support the most exposed operators in the sector. To ensure a future for this species, everyone must do their part.