12 years have passed since Ulysses, the Marsican brown bear, enriched the fauna of the Sibillini Mountains with its 3-year presence.A pioneer in the exploration of new territories, a traveller in the Apennines, he had filled the hearts of those anxiously awaiting his arrival with joy. Unfortunately, in his wanderings he had no luck and ended his days on his return to Abruzzo. Since then there have been other reports, but no certain news of bears in the Sibillini Mountains until last autumn, when an individual was sighted and documented on more than one occasion.

In recent days damage has been ascertained to some hives, in distant locations, and now we cultivate the hope that perhaps the heirs of Ulysses are more than one.

Stefania Servili, Representative of Salviamo l’Orso for the Marche Region. 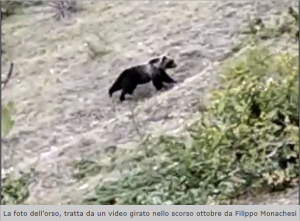