The beech tree belongs to the family Fagaceae and is one of the most widespread trees in Italy. In the Central Apennines it occurs in an altitude range between 800 and 2,000 metres.

Its foliage, always in search of the sun, stretches upwards as far as 20-30 metres in height. It is a long-living tree that can reach 500 years of age. In the autumn it loses its leaves creating hues of orange light and splendid warm colours.

It is sometimes known as “the King of the woods” because with its thick canopy and branches it dominates the forest, which limit the development of the undergrowth. It is considered magical because it creates woods and continuously contributes to soil generation. It keeps the soil fresh and well drained thanks to its considerably large root system and provides a perfect environment mushrooms for thrive.

It has smooth, gray and fragrant bark that is unmistakable.

Beech is a monoecious plant. So, it produces both male and female flowers. Flowering, which usually takes place in May, will give the other species in the wood a delicious food source in autumn: small triangular beechnuts. These beechnuts make up a large portion of the bears diet, and studies have shown that the bears birth rate increases when this food source is most abundant. Beechnuts are also edible for humans, but it is recommended to consume them toasted to eliminate the toxins they contain.

Beech is considered in mythology as a cosmic tree, a real stairway to heaven and the divine. In fact, the Italian peoples and the Romans worshiped the beech forests considering them places where they could meditate and get closer to the gods. The sacred forest of the goddess Anxa near today’s Luco dei Marsi is an example of this ancient worship. 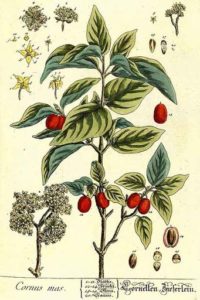 The Cornelian cherry or dogwood is a spontaneous shrub belonging to the Cornaceae family. Its name derives from the Latin: cornus = horn, for the shiny and hard wood like the horn and mas = male, perhaps to distinguish it from the dogwood (Cornus sanguinea), formerly called Cornus femina.

Cornelian cherries are broadleaved and deciduous shrubs, which are up to 5-6 metres high and equally wide. The branches are red-brown, characterized by scaly bark. They are long-lived plants, which may be centuries-old and grow very slowly. This species prefers calcareous soils, and lives in small groups in the clearings of the deciduous forests, among the shrubs and in the hedges of the plain up to 1500 – 1600 metres above sea level. It blooms between February and March before the foliation phase. The flowers are yellow and small in size (approximately 5mm).

The fruit of the dogwood is an edible drupe (fleshy fruit), which looks like a small and scarlet olive or oblong cherry with a slightly sour taste. It ripens in August and is particularly appreciated by bears in the period of hyperphagia, when they must feed abundantly in view of the hibernation period. The drupes contain a single bone seed, recognizable within the excrements of the animals that feed on it.

The Romans used the robust wood of the Cornelian cherry for the construction of darts and berries for food use, cultivating this shrub even in their gardens. A legend tells that Romulus, the founder of Rome, threw his dogwood javelin towards the Palatine to mark the boundary of the future city. The dogwood handle, sticking into the ground, rooted and flourished to symbolize the future power of Rome.

Today their fruits are used in cuisine for excellent jams and in herbal medicine as strong astringents and antioxidants, which are also rich, as well as dog rose, with a large percentage of vitamin C. A fire oil is obtained from the seeds, and the whole plant has yellow dyeing properties. 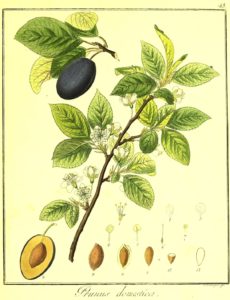 The European plum (Prunus domestica) is a species of tree in the Rosaceae family well known for its fruits known as plums. The origin of the word plum is somewhat uncertain: it probably derives from the Indo-European root prus, meaning burnt, from which also the Greek pyrsòs derives, meaning vivid red colour.

It originates from Asia, but the Romans first introduced it to the Mediterranean around 150 BC. It is then believed that the Knights of the First Crusade brought it across Europe around 1200 AD, first to France, then to Germany and other regions.

The plum tree has the typical umbrella shaped canopy with a height ranging from 3-8m, depending on the variety and the climatic conditions. It prefers fresh, deep soils and it is possible to find it up to 1,000 meters above sea level. Sometimes with gnarled bark, usually it presents white flowers that bloom in the early spring, typically before the leaves of the tree have sprouted. The oval or spherical fruits reach a size up to 8 cm.

Depending on the variety, plums ripen between June and September and can be different colours, yellow, red or bluish. The Marsican brown bear is very fond of them and will never miss an opportunity to taste these sugary fruits, which are available during its period of hyperphagia when it must consume large amounts of food.

The plum tree does not live too long and yields fruit for about 20 years.

In the past, the plum was used as a lucky charm to wish for a happy marriage, to cure the sick or soothe the irritable. In China, there is curious tradition for girls to count the ripe plums left on a tree, in order to calculate how long it would take them to find a husband.

The plum is used widely in herbal medicine because of the high vitamin content (A, B1, B2 and C) and the mineral content such as potassium, phosphorus, calcium and magnesium. 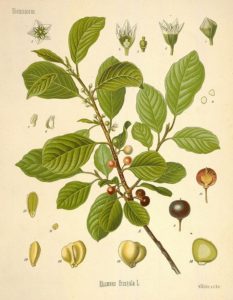 The alpine buckthorn is a bushy shrub of the Rhamnaceae family that in the Central Apennines usually lives between 800 and 2,000 meters above sea level and which can reach a maximum height of 2-3 meters.

It lives preferably on rocky slopes with a fair degree of humidity. It loves the sun and the wind. It is defined as “pioneer” because is able to settle in environments which are almost impossible for any other plants.

It blooms in the months of May – June. Its fruits, the drupes, ripen between August and September.

The drupes have a diameter of about 5 mm, fleshy pulp and sweetish taste. They have laxative and purifying properties. The bears are fond of them and, during the period of maturation, they assiduously frequent the buckthorn shrublands, which therefore hikers must avoid not to disturb the feeding animals. Through the feces, the bears spread the small seeds of the alpine buckthorn (zoochory) facilitating the dissemination and genetic variability of this plant.

In the past the alpine buckthorn was included amongst the human pharmaceutical treatments. Today its fruits are considered too energetic laxatives and only a small part of the bark has been chosen to use for regulatory and purifying herbal teas.

The leaves have a silver underside. In winter they fall showing the intricate and fascinating group of branches that compose the alpine buckthorn, which is considered as an ornamental plant. 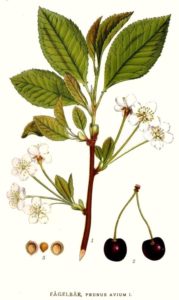 The wild cherry, also known as the “bird cherry”, is a tree in the Rosaceae family.

Its scientific name derives from the way the plant propagates: very often, in fact, the birds that feed on drupes can crack open the core with their powerful gastric juices and then disperse the seeds through their droppings.

Prunus avium grows to 15-32 meters high, with an erect bearing and a rounded crown. Its smooth purple-brown bark is often interspersed with elongated and horizontal cellular formations (lenticels) of a grey-brown colour. The tree exudes a resin from its wounds, called “cherry gum”, that is often used in flavoring candies and sweets.The wild cherry has a particularly robust root system, with deep and extended roots. It is a not very long-living tree, reaching a maximum age of about 100 years. It lives well in the woods, especially at the edge of clearings, up to 1,600 meters above sea level.

The cherry blossoms, which precede the appearance of the leaves, have 5 pure white petals, and are usually borne in small bundles called corymbs (of two to six together).

Its fruits are drupes or cherries, slightly smaller than the cultivar species and have different hues of colour, from red to purple and even black.

Bees and many other pollinating insects feed on early flowering. Badgers, martens, foxes, stone martens and other small rodents of the woods feed on the fallen fruits. The bear, being an excellent climber, feeds directly on the tree, carefully selecting the best and sweetest drupes.

Wild cherry, of Asian origin, seems to have been imported to Rome in 73 BC. Its name derives from Cerasunte, a city on the Black Sea. However, the seeds of a certain number of species of cherries have been found throughout Europe in archaeological sites from the Bronze Age, from Roman times and in the ruins of a village of stilts in the Lombardy area.

Some beliefs say that during Christmas time, farmers used to tie a rope around the tree trunks, as a threat to those trees that had not yielded enough fruits the previous year. In 17th century France, some regulations required respecting wild cherry trees, so that the poor could eat their fruits.

The cherry wood is light pink to yellowish brown in color. It is sought after by the furniture industry, both in logs and beams and for the construction of musical instruments.

In Greek mythology, the cherry tree was sacred to Venus and its fruits were thought to bring luck to lovers. In Sicily it is believed that declaring one’s love under a cherry tree would always bring good luck.

Wild cherry is used in herbal medicine in the form of decoctions and herbal teas, given its high content of vitamin C. It has diuretic, uricolytic, laxative, refreshing, aromatic, anti-gout, astringent and anti-inflammatory properties. Cherry peduncles are also utilized in popular medicine as renown diuretics.