Last 27 October, Salviamo l’Orso signed an agreement with Rewilding Apennines, the third sector entity that represents the Rewilding Europe initiative in the central Apennines, formalizing a collaboration that had already started practically together with the establishment of two organisations.

The theme of rewilding is surging, both from a scientific point of view and among a more general audience, and refers to the restoration of natural processes and ecosystems on whose balance the life of all of us depends. 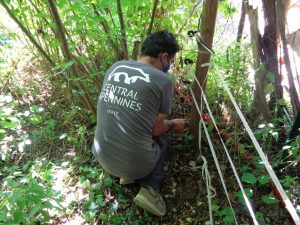 In the decade in which rewilding was taking hold, Salviamo l’Orso was established in September 2012, while Rewilding Apennines in December 2013, following the acceptance of the candidacy of the central Apennines as a “rewilding area”, on the farsighted proposal of the biologists Alberto Zocchi and Bruno D’Amicis, who would become both board members and staff of the organization.

Salviamo l’Orso and Rewilding Apennines immediately collaborated in the road safety project on the SS 83 Marsicana and in the Bear Measure Community Genzana programme. Thanks to a contribution from RA of € 2,000, SLO was able to extend the wildlife-vehicle collision mitigation measures, targeted on the bear in particular, in a stretch of about 10 km between Pescasseroli and Opi. In 2015, both associations helped the Monte Genzana Alto Gizio Nature Reserve to secure the small farms in the territory of Pettorano sul Gizio to prevent further episodes of intolerance towards some bears who frequented the area, as happened in September 2014 with the killing of a young male.

From this joint initiative, the transition to the Genzana Bear Smart Community was short. Since then, the fate of the two organizations has become increasingly connected, until a real handover took place from the founders of RA to some members of Salviamo l’Orso, with the support of the managing team of Rewilding Europe. 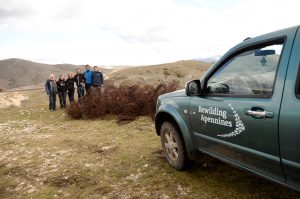 In 2018, in fact, Mario Cipollone and Angela Tavone, authors of this article, former members of the SLO’s Board, were respectively designated as Team Leader and Communications Officer of RA. However, Rewilding Apennines was formally reconstituted only in April 2019, with a Board composed of researcher Piero Visconti, in the role of Chairman, the biologist and famous naturalist photographer Bruno D’Amicis, in continuity with the previous establishment, as vice president and Annette Mertens, biologist and expert in European planning, as secretary. Meanwhile, Rewilding Europe championed SLO with a donation of € 118,360 to guide the re-established RA’s working group. Thus, in 2018 the Dutch foundation was the main sponsor of SLO. 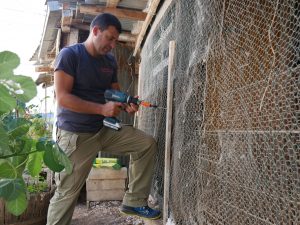 Since April 2019, Rewilding Europe has directly financed the reconstituted Rewilding Apennines. The collaboration between SLO and RA has continued with the mutual benefit of creating an enlarged and complementary working group on the bear and on combating the threats to its conservation, especially outside the protected areas. If RA relies on paid staff, including the bear ambassador Pietrantonio Costrini, an expert in bear damage prevention measures and former consultant of the WWF and Salviamo l’Orso, and the field officer Fabrizio Cordischi, active member of SLO, in addition to Angela and Mario, our association contributes annually to the activities of the partner organization by providing an army of volunteers (even in COVID’s time), material, experience, know-how and its own network of local relationships.

In the three-year period 2018-2020 this synergy led to extraordinary results, which are divided by year in the table below: 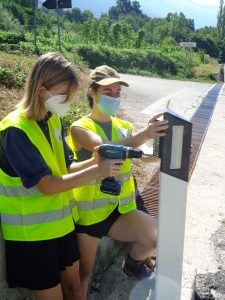 196 bear damage prevention devices installed with their verification and maintenance, which reaches 229 units with those built in previous years; 13,403 monitoring data collected in the field; maintenance of road-kill preventive measures along the 26 km of the SS 83 Marsicana and 22 km of the SS 17 between Pettorano sul Gizio and Rocca Pia (in 2019-2020 the setup of wildlife warning optical and acoustic reflectors was extended for a further 2 km); 83,846 m of barbed wire removed from areas of high natural importance; 10 wells potentially dangerous for the fall and drowning of wildlife were made safe thanks also to an annual donation from AISPA for the project “A passage for the Bear”; 779 fruit trees were pruned to preserve and increase food resources for the bear in mountain areas; 170 trees were planted and 22 dumps cleaned.

The contraction of some activities in 2020 is undoubtedly due to the containment measures of COVID-19.

Over the years, the mutual benefit has also resulted from the amplification of the dissemination and communication activities about biodiversity protection, man-wildlife coexistence, social, economic and psychophysical benefits for local communities that conservation and promotion of natural resources – of which the Marsican bear is the icon – bring. All this has been disseminated at local, regional, national and international level thanks to an ever growing and more motivated network, direct thematic meetings and public events, the constant publication of posts and articles on the web and social media and the sharing of effective and striking communication products, such as photos and video-documentaries made by various friends and professional collaborators.

This year the RA team has expanded with Valerio Reale, Enterprise Officer, who is dedicated to the development of a network of nature-based companies and fundraising, as well as the Management of RA has been enriched with two other eminent figures, Antonio Carrara, former President of the National Park of Abruzzo, Lazio and Molise, who took over from Visconti as president, and Donato Pinto, an international senior finance expert, as advisor.

The agreement between SLO and RA promises to continue bearing fruit in the future on the solid basis built so far, working in close collaboration and complementarity in the actions about the conservation of the Marsican bear and its habitat.