Let’s take action for the bear

LET’S TAKE ACTION FOR THE BEAR

In August 2017, the “Let’s take action for the bear” project was submitted to an EOCA call for nature conservation. Nominated by Ferrino amongst 131 proposals from all over the world to represent the “Mountain” category with three other competitors only, it did not rank first in the online people’s vote of October 2017. However, on November 7th it was considered eligible for funding thanks to the preferences of the EOCA members at the end of an internal vote.

This project consists of the following set of conservation actions to enhance the habitat of the Marsican brown bear and promote its spill over from the core areas to neighbouring suitable lands:

Local communities will be involved in the implementation of all these activities. “Thanks, EOCA, for making it possible!”

Health and safety
Our volunteers carried out all these actions in compliance with the national health and safety legislation, wearing the personal protective equipment.

In ten days (three weekends and four weekdays) of pruning abandoned orchards Salviamo l’Orso volunteers and some local people, supervised by the staff of Monte Genzana Alto Gizio Nature Reserve, pruned 198 fruit trees, in particular apple and cherry trees. In the weekend 10-11th March 2018, 17 volunteers were involved with 48 fruit trees pruned. In the following weekend, 17-18th March 2018, 7 volunteers pruned 22 trees. The scarce participation was due to the bad weather forecast. In fact, rain and sleet conditioned the activity and the performance of the volunteers. In the last weekend, 14-15th April 2018, thanks to warm spring days, 13 volunteers pruned 94 trees, for a total amount of 164 (Images 1-3). On 22nd-23rd October and 15th-16th November, Salviamo l’Orso volunteers carried on this action with respectively 9 and 8 people only. In fact, because of very rainy weekends, we had to organise the activity in weekdays with the few volunteers available. The uncertain weather forecast discouraged us to launch an event as we did in spring. Our volunteers cleared 34 more trees (mainly apple trees) from dry branches and antagonist vegetation (Image 6), marked 170 more trees and built “insect and amphibian houses” with the organic leftovers of pruning. As the trees were not yet in dormancy, the Reserve specialists recommended to postpone pruning to the spring 2019.

The pruning place is an area of ​​high naturalistic value, which is situated 45-minute walk from the small town of Pettorano sul Gizio. The participants walked that distance every morning and back in the afternoon according to the spirit of the sponsor, EOCA. They could spend a weekend full of nature and outdoor activities, in a convivial atmosphere, thanks to the hospitality of the Reserve and the Bear Smart Community Genzana. Local restaurant served from farm-to-table food and drinks, while the cooperative Valleluna provided the volunteers coming from a ≤30 km distance from Pettorano sul Gizio with a comfortable accommodation.

In total, we have treated 198 fruit trees, which exceeded the 150 trees estimated in the proposal, despite the number of participants was less than expected. With our great satisfaction, the pruned apple trees borne fruit (Images 4,5). The recovery of abandoned orchards in natural areas aims at increasing the availability of food sources for the Marsican bear outside urban areas and reduce conflicts with rural activities. This action complements the best practices of coexistence with the species included in the Genzana Bear Smart Community guidelines.

Throughout summer and even during the latest activity, bear signs of presence were found. From the different scat size, the female with three cubs frequented the pruning area and also different individuals, which have been recorded by camera traps. The content of the poo was mainly apple (Image 7), confirming the action’s success in terms of increasing food availability for the bear.

The main challenge we faced was involving volunteers. Although we proposed an experience deep in nature with a comfortable accommodation and delicious local food and drinks, the uncertain weather conditions demotivated many people to participate. On the contrary, those who took part at the events were so highly motivated that they achieved the main result with a part of the budget still available. The high density of bears in the pruning area, with at least 6 individuals reported, including a female with three cubs, make us confident about the effectiveness of this action.

In spring 2019, we carried on the pruning in the Monte Genzana Nature Reserve with more 47 new trees treated in two pruning sessions (30th March and 13th-14th April). In agreement with the partner organisation Montagna Grande, we pruned 474 trees (mainly apple and pear trees) in unused orchards in the mountain territory of Ortona dei Marsi in the Giovenco Valley, a wildlife corridor connecting north the Abruzzo, Lazio and Molise NP with the Sirente Velino Regional Park. We were hosted by Montagna Grande for free.

This action led to a decrease of road kills in the area where both the “whistling” and the optical warning reflectors (Image 10) were set up. The year before wildlife-vehicle collisions with cars were further more with tens of animals involved, serious damage to cars and a casualty. We are waiting for official data from the Monte Genzana Nature Reserve for a more accurate comparison.

On 5th December 2017, the Salviamo l’Orso volunteers started a preparatory research to determine the incidence of barbed wire on wildlife ecology. They set a camera trap in front of a line of barbed wire along a game trail. They took videos of wild boar hindered by the wire, a wolf chasing a hare, which probably escaped because of the wire impeding the wolf’s sprint, and many other animals, such as foxes and badgers, which apparently avoided passing under the barbed wire. With the removal of the barbed wire on 25th April 2018, the volunteers noticed an increase of animals using the game trail – maybe because of the spring also – including species that before diverted that passage. Even a roe deer has started using the trail after the removal of the barbed wire. The volunteers removed the trail camera on the 25th May 2018. This video was made with the camera trap’s footages. We have published online two interesting videos: a stag with barbed wire coiled around his antlers and impeding his movements and a griffon vulture which got stuck in a line of barbed wire before breaking free.

On the 25th-26th June 2018, Salviamo l’Orso, took away 1,002 m of barbed wire and metal fence from the mountain area between Villalago and Bisegna, around the cottage of Terraegna (Image 11). It is about parts of old fences built many decades ago to confine the livestock or to protect anti-erosion reforestations from cattle grazing between 1960s and 1970s. No one has ever taken away those long metal coils that today do not protect anything more and, instead, they are an impediment to the movement of animals (and people, who often stumble on it).

Despite the rain and the exceptional cold for this season, during six hours in total of intense work, sometimes even unearthing the wire or releasing the ingrown plants by then), untangling, measuring and bringing to the collection point more than 1,000 m of barbed wire. That is a success if we consider the hard weather conditions and the tangle of wire that the volunteers had to take away from a thick forest. The small company of nature guides Wildlife Adventures hosted the volunteers in the cottage, providing one-night accommodation, local food and drinks in a friendly and cosy environment. 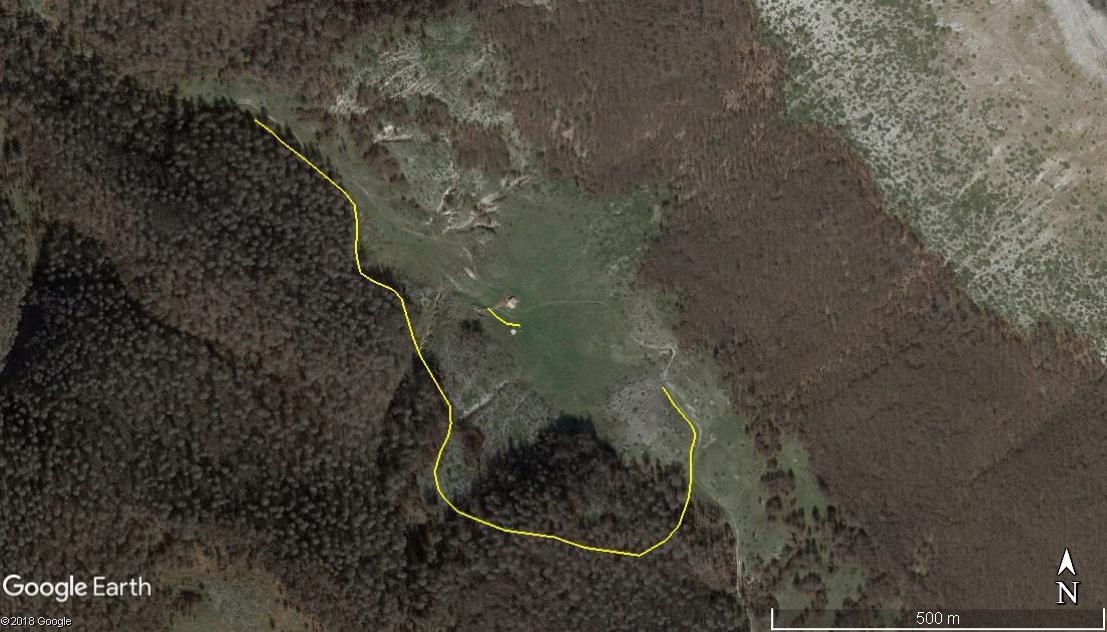 In the weekend 10-11th November, Salviamo l’Orso removed 3,364 m of both smooth and barbed wire (equal to 1,300 m of fence) (Stretch A) in Macchia di Rose (Image 12), in the territory of Villalago in partnership with the Municipalities of Villalago and Anversa degli Abruzzi, the associations WWF Abruzzo, Rewilding Apennines and Ambiente e/è Vita, the Gole del Sagittario Nature Reserve and WWF Oasis and the Lake San Domenico and Lake Pio Natural Reserve.

In spite of the cold, during the weekend of the 17-18th November, our hardworking volunteers carried out the removal of barbed wire in the same location (Stretch B and C). 2,100m of landscape has been freed from 6,300m of wire. Since the beginning of this initiative, 8,764m of barbed and smooth wire, equal to 4,400m of fence, have been permanently removed from the mountains between Villalago, Bisegna, Anversa degli Abruzzi and Ortona dei Marsi. Because of the unavailability of Terraegna cottage and the cold temperatures, both weekends we were based in Anversa degli Abruzzi, in the dormitories of the Gole del Sagittario Nature Reserve. 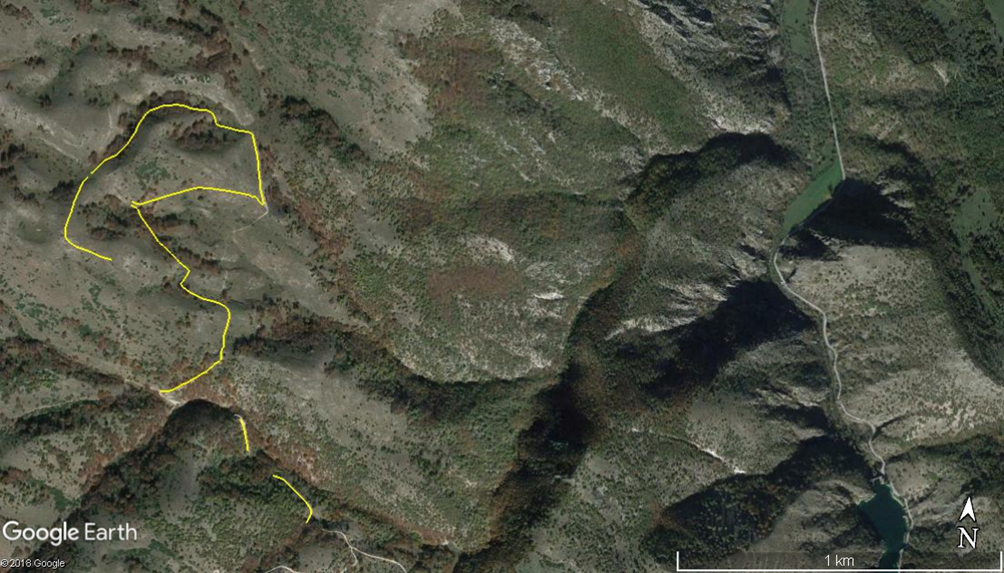 Within a sustainable disposal framework, the residual wooden posts have been stacked on sites, which were not visible from the nearby paths and roads, to simulate heaps of dead wood that can play as shelters for some little animals (Images 13-15). In our case, we have adopted two different methodologies to create the stacks: 1) close to bushes in open areas, on their southern side, in order to create thermoregulation sites for reptiles or wind barriers for grassland birds nesting inside the bushes; 2) close to deciduous trees in the forest, in order to create wet shelters for terricolous amphibia typical of the wood, like salamanders. Even though there is no ecological analysis to support this action (i.e. attesting that shelter availability is the limiting factor for the target species populations) we believe it represents the best trade-off between logistical constraints for the disposal of the posts and the destiny of these wooden artefacts, which over time will be naturally degraded by biological communities in the intervention area. Only a few wooden posts have been left standing on the mountain ridges to provide the protected shrikes with perches.

While we were having a similar activity in Pettorano sul Gizio, in agreement with the Monte Genzana Reserve but out of EOCA project, we made a short video of barbed wire removal.

Due to the large extension of barbed wire still in nature, in spring 2019 we carried out this activity in the same area from the 30th April to the 3rd of May, taking down 5,500 m of metal cables and barbed wire (equal to 2,200 m of fence).

We also removed barbed wire between Gioia Vecchio and Sperone, in the buffer zone of the ALMNP, where 6,000 m of barbed wire, equal to 2,500 m of fence, was taken away from the natural environment.

From the 23rd to the 27th July 2018, 5 Italian and 14 foreign volunteers of Salviamo l’Orso worked to restore the signage of the trails M2, M6 and M7. This action aimed at enhancing the fruition of these three trails, close their deviations and consequently minimize disturbance to bears in areas where they forage, winter and breed cubs. In fact, improving accessibility to the area through identifiable paths is a strategy to prevent that hikers, especially those who are not familiar with the area, do not roam off trail, to strengthen the control of the territory and reduce illegal actions. A video describes better than thousands pictures the very nice atmosphere of those 5 days in the wild, with Italian and foreign volunteers working together and sharing amazing experiences in the wild, such as wildlife watching, escorted by expert guides.